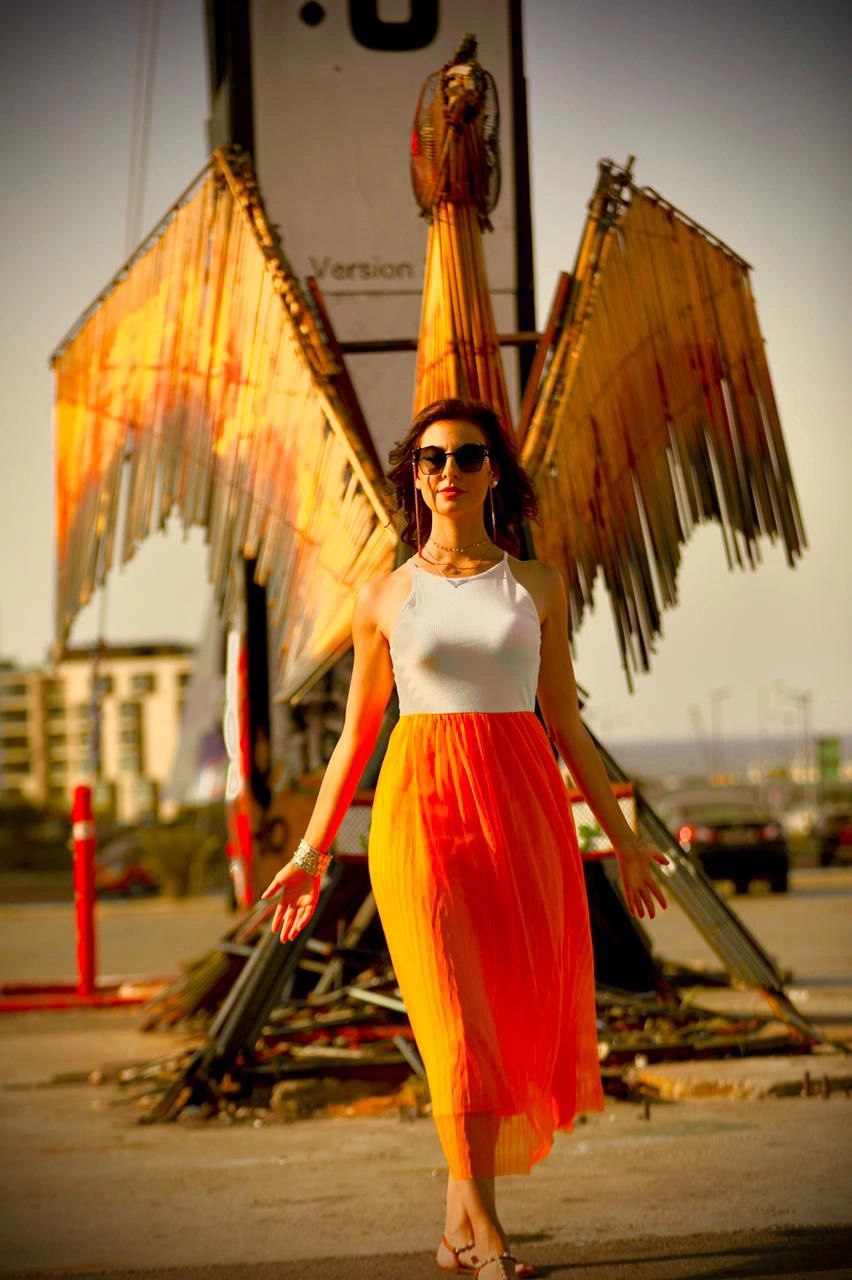 -B.S. in Graphic Design from the Lebanese American University — Beirut

-M.A. in Marketing Communications from the University of Westminster — London

Hayat is most well-known for her street art during the Lebanese Revolution.

Some of her artworks are:

-Saucepans Tree — a reinterpretation of the Lebanese people’s family tree, raising awareness against sectarianism. It is made out of people’s saucepans and decorated with their names and regions.

-The Heart of the Revolution — made from tear gas canisters collected during the protests, stones that the protestors used, razor wire in reference to the siege surrounding the Lebanese parliament, and the Grand Serail, as well as a metal base alluding to the check points of the Lebanese army that are scattered around Beirut.

Prior to attaining visibility as an artist, Hayat had long been active within the sociopolitical scene in Lebanon. Nazer spent much of her teenage years volunteering in underprivileged neighborhoods in Lebanon's North.  Hayat commenced her academic career studying graphic design in Beirut, and later pursued a master's degree in Media & Communications in London. Afterwards, Hayat moved on to working with the United Nations Development Program (UNDP), as well as the United Nations Refugee Agency (UNHCR). Nazer also represented Lebanon in New York, Beijing, and Ankara throughout her assignment at the Ministry of Social Affairs, working on the Syrian Refugee dossier.

Feeling restrained, and unfulfilled throughout her governmental post, Nazer resigned, embarking on a journey as a full-time artist, in order to realize her conceptions, and make a bigger impact.

Through her multi-layered artistic endeavors, Nazer attempts to tackle several seemingly separate, yet interconnected matters at once. The underlying propeller of Hayat's creative process is often humanitarian at core. Hayat's solo work is substantially derived from her personal dreams and visions. The artist also engages in participatory projects, tackling current matters of national concern in Lebanon. ln conceiving a common collaborative artistic goal among otherwise unacquainted individuals, the artist activates a team-oriented dynamic, thus realizing a sense of cross-societal integration—including that of marginalized individuals. In doing so, the artist musters an inclusive, coherent, and purposeful enterprise among collaborators.

The artist intends to continue effecting change through art, and is currently developing projects in order to expand her outreach, and her capacity to make a difference. Nazer's present focus remains on social integration, livelihoods, and freedom of expression, while promoting art therapy, upcycling and waste management.

My mission is to make positive change in the world through art by inspiring as many people as possible to overhaul the current political system in Lebanon, and to fight for people’s rights and freedoms; for equality and basic human needs. On a personal level, I wish to encourage people to follow their dreams, do good, help others, love themselves, and make peace.

I believe my purpose in life is to make a tiny change in the world before I leave.