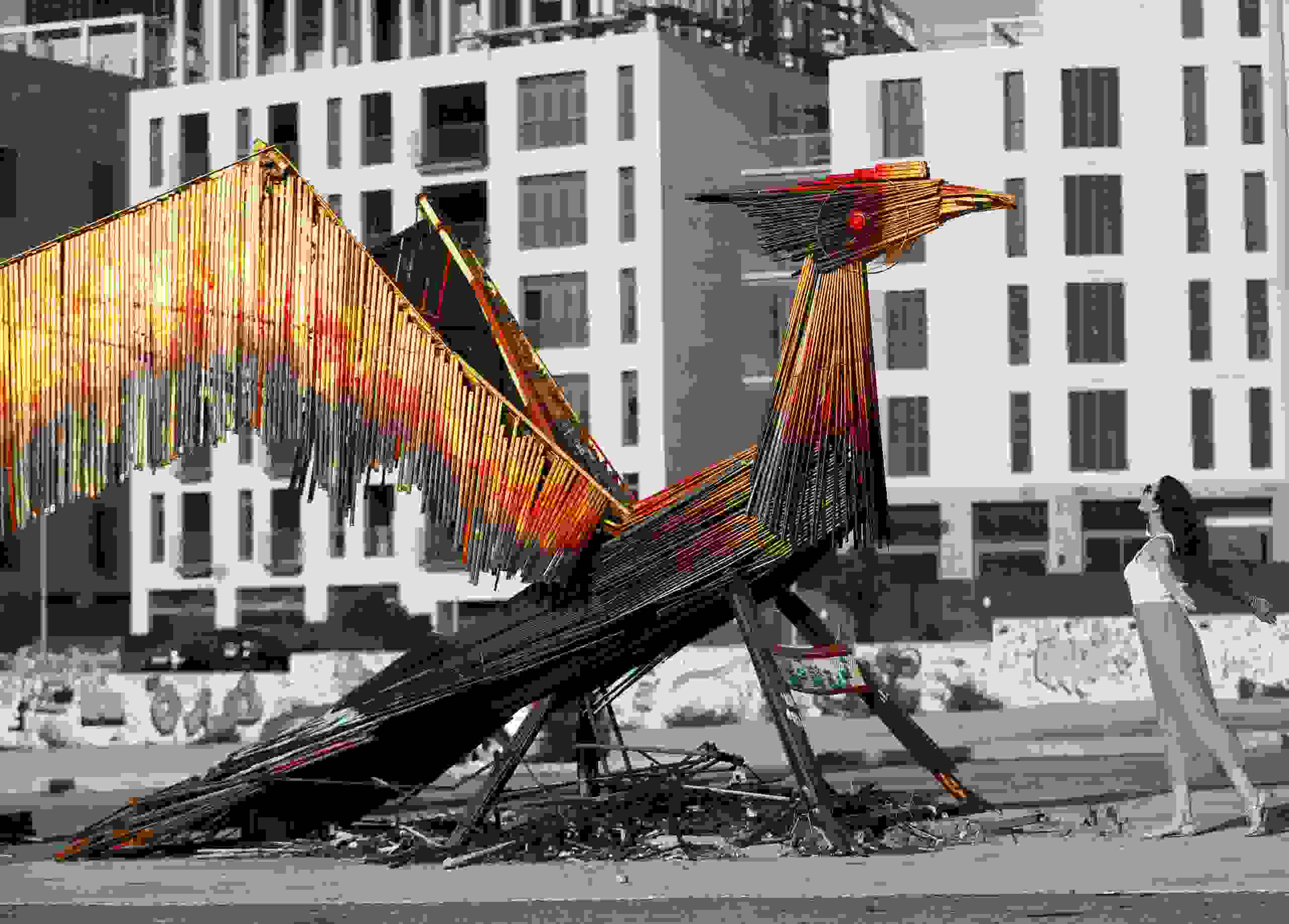 On the 29th of October, a pro-government mob attacked the Martyr Square assembly. They burnt tents, assaulted protesters and activists, in a desperate bid to deter the uprising calling for change. The remaining metal from the burnt tents was stockpiled under the 'Revolution Fist'. A disheartening moment was quickly followed by stronger determination, and persistence of purpose, as Hayat envisioned within the debris, a dormant phoenix waiting to be awakened.

On the 21st of November, the Square witnessed another attack which saw the 'Revolution Fist' burning down in flames. The Fist was immediately replaced, and on the 22nd—coincidentally the anniversary of the Lebanese Independence—Hayat was back on ground zero rallying fellow revolutionists to bring the legendary Phoenix back to life.

Embarking on her first-ever sculpture, Hayat did not know how she was going to go about it at first. As the word about her mission spread around, tens of people volunteered to collaborate, and the Phoenix took a life of its own, rising piece by piece through their joint efforts.

A month later, the Phoenix stood proud testifying to the resilience of the Lebanese people, and the constructive potential that remains latent behind their communal synergism.

Legend of the Phoenix

In ancient mythology, the symbolism of the majestic Phoenix bird, which is most often connected with the Sun, dies and is reborn across cultures and throughout time.

Ancient legend paints a picture of a magical bird, radiant and shimmering, which lives for several hundred years before it dies by bursting into flames. It is then reborn from the ashes, to start a new, long life. So powerful is the symbolism that it is a motif and image that is still used commonly today in popular culture and folklore.

The legendary phoenix is a large, grand bird, much like an eagle or peacock. It is brilliantly colored in reds, purples, and yellows, as it is associated with the rising sun and fire. Sometimes a nimbus will surround it, illuminating it in the sky. Its eyes are blue and shine like sapphires. It builds its own funeral pyre or nest, and ignites it with a single clap of its wings. After death it rises gloriously from the ashes and flies away.

Symbolism of the Mythical Phoenix Bird: Renewal, Rebirth and Destruction 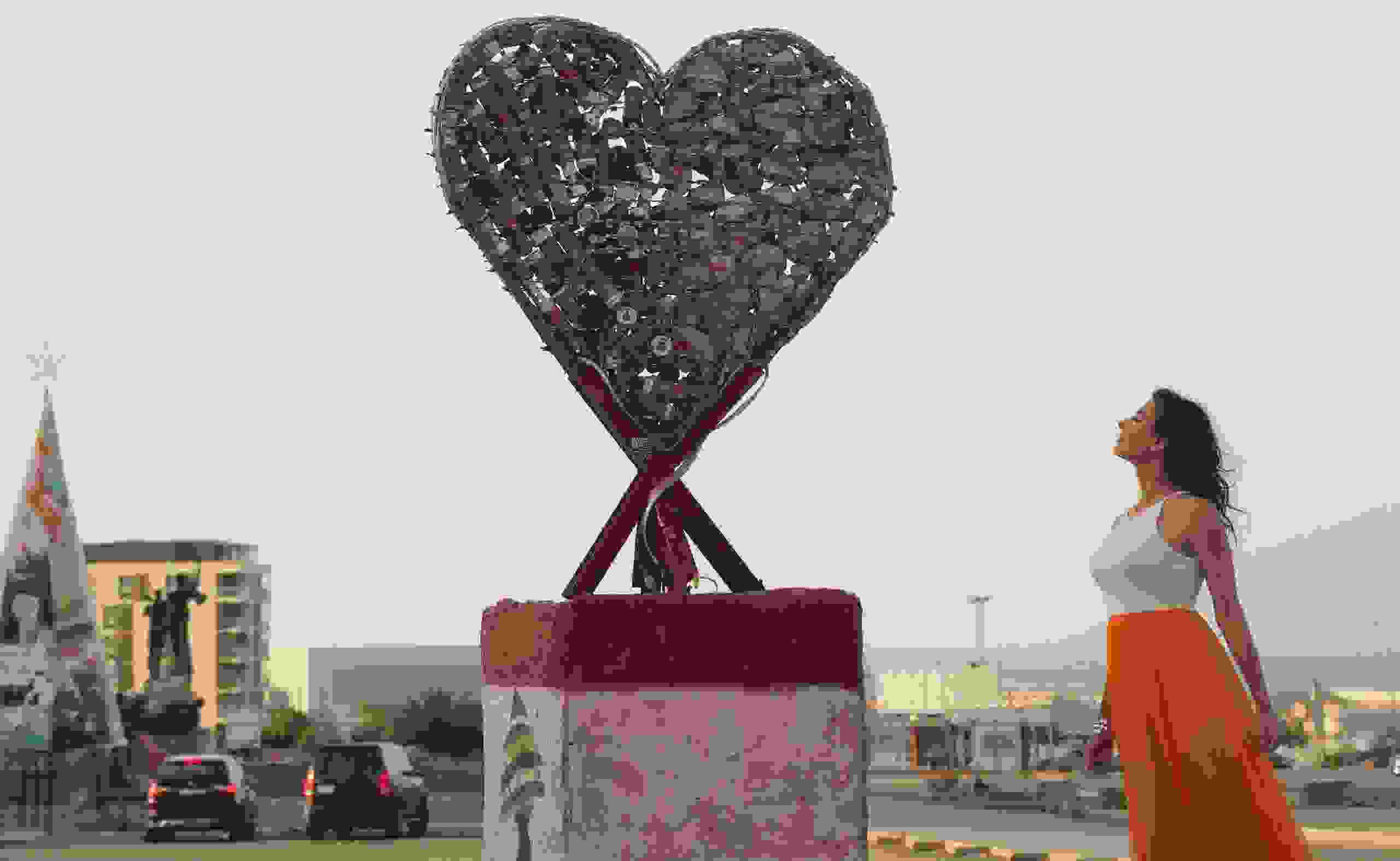 Heart Of The Revolution

Qalb al Thawra stands for "Heart of the Revolution" in Arabic.

While the Lebanese security forces were hurtling grenades, and shooting rubber bullets at protesters, who were in turn retaliating with stones, Nazer & Co. were busy collecting the fallen munition. In the face of the mutual offensive, a message of fraternity and love had to be shared, and thus once objects of aggression, were turned in participatory style into a token of love.

The piece was erected on the 14th of February of 2020, celebrating Valentine's day, and is still standing in Martyrs' Square encapsulating memories of the uprising—a shrine commemorating the names of the martyrs of the revolution.

The violence began as demonstrators, who had been attacked during a sit-in by masked counter-protesters, tried to move into a square near parliament.

Protests over economic mismanagement by the ruling elite began in October.

Saturday's events are some of the worst violence since the largely peaceful protests started. They triggered the resignation of the Prime Minister, Saad al-Hariri, but talks to form a new government are deadlocked. 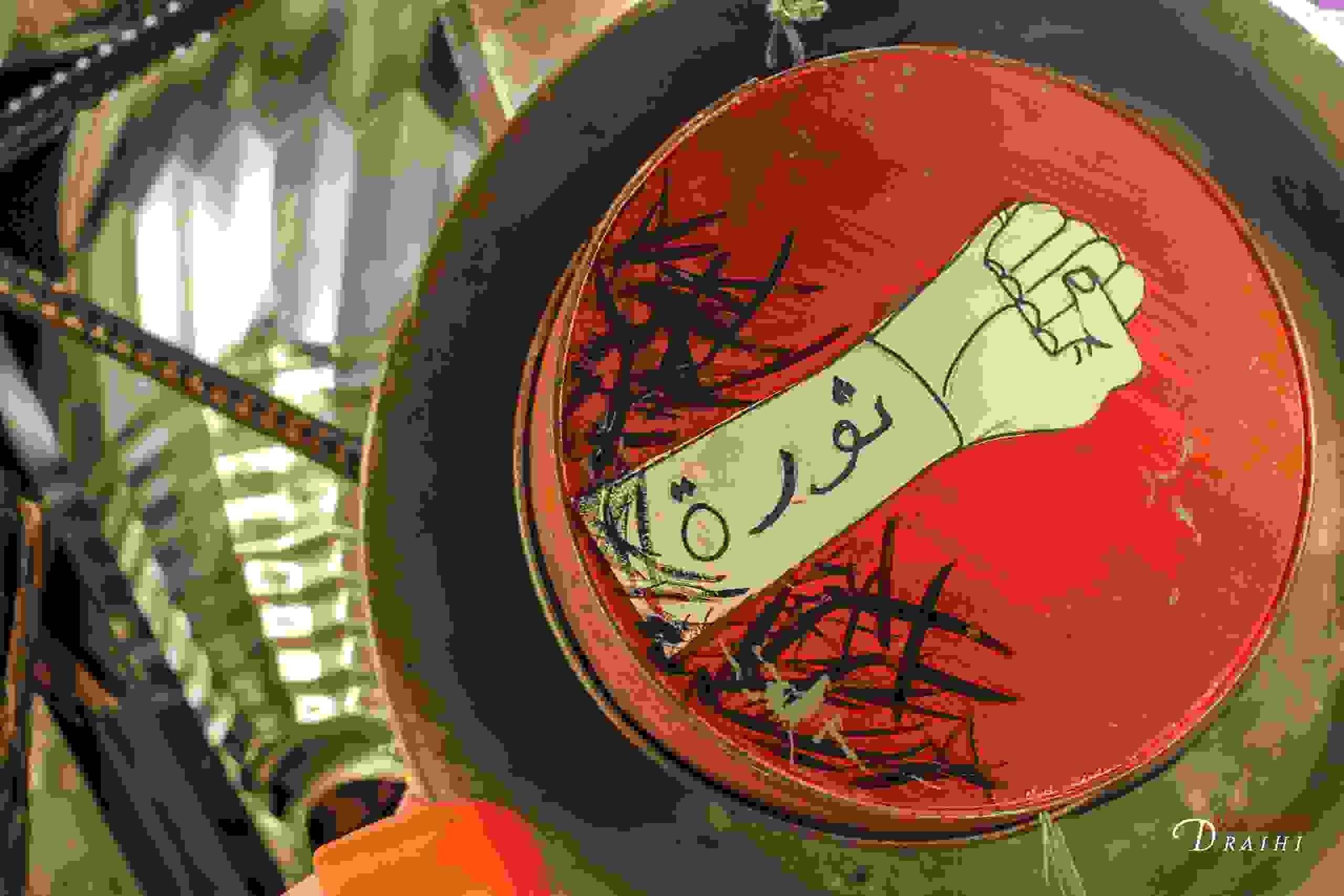 The People's Tree is another collaborative piece by Hayat Nazer. It is a reinterpretation of a Christmas tree, which is decorated by old pots sent by Lebanese people from all across the country, as well as expats living abroad. The pots were signed with the names, wishes, and region names of the people who sent them.

For each pot Hayat received, she was also able to donate a new one to a family in need.

The tree carries across its branches once-cherished household items coming from all regions of the country, and thus presents itself as a manifestation of a family tree that unites the entire Lebanese people, which recurrently deals with issues of national identity and sectarianism.

On the 21st day of the revolution, people around the country brought out their kitchen pots, pans, and utensils to the streets and started banging on their instruments as loud and hard as they can.

This method of banging kitchen tools happens to be called Cacerolazo Cacelorado, or Casserole, and it is a form of popular protest which consists of a group of people making noise by banging pots, pans, and other utensils in order to call for attention.

The origin of Cacerolazo (the word comes from the Spanish word cacerola, which means stew pot) is South America, in particular, Argentina, Chile, Venezuela, and Brazil.

It then spread to Quebec in Canada, and Turkey as seen in the 2013 protests in Turkey.

Sounds of Banging Pots & Pans Can Be Heard Across Lebanon