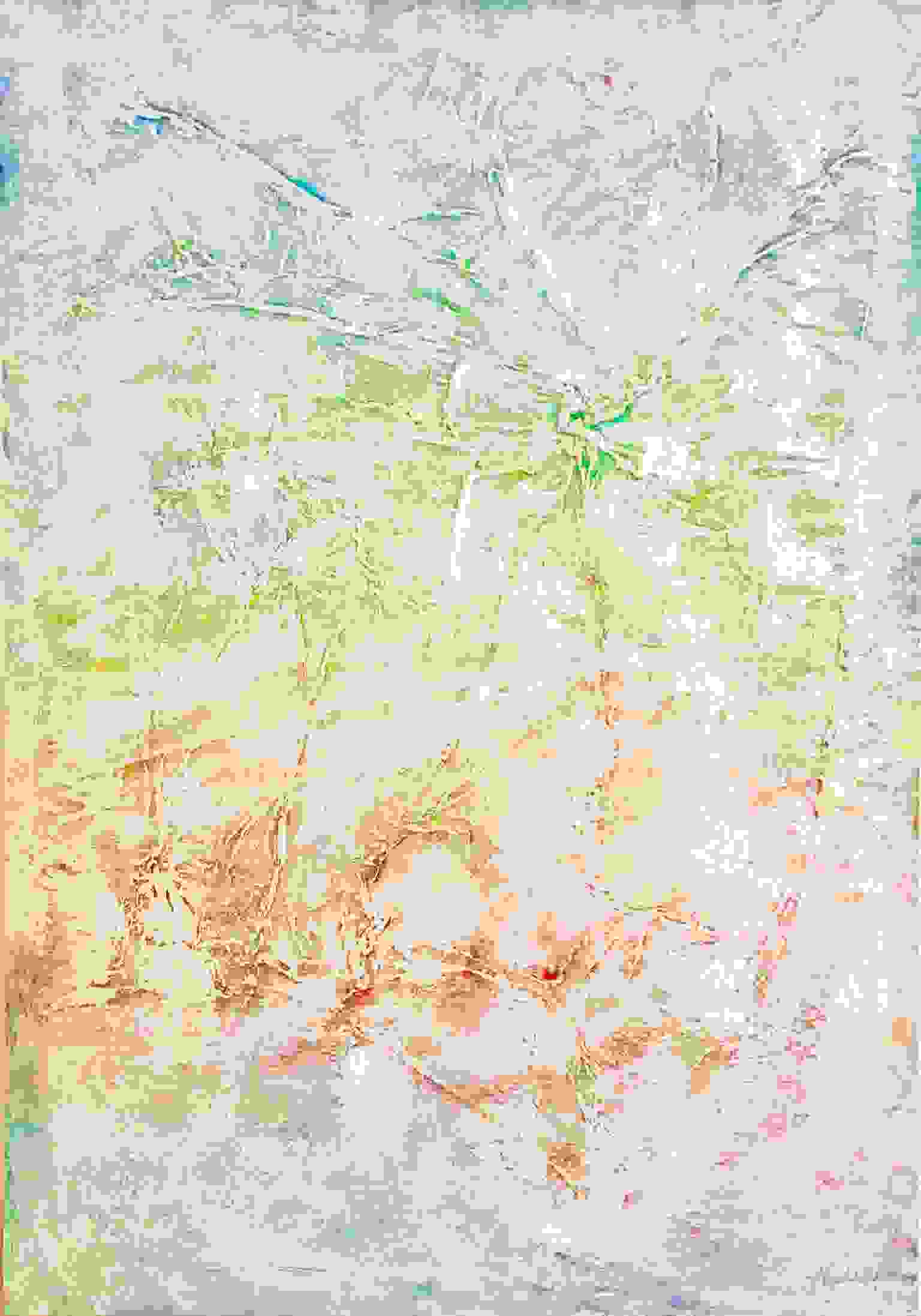 In the midst of a healing and detox trip in Marbella, Spain, in an attempt to heal my physical and emotional wounds, I painted the colors of the chakras, trying to align them, and I covered the painting with medical gauze. I thought, maybe, by looking at this painting, the viewer's chakras and scars would be healed. Simply by looking, and feeling this painting. 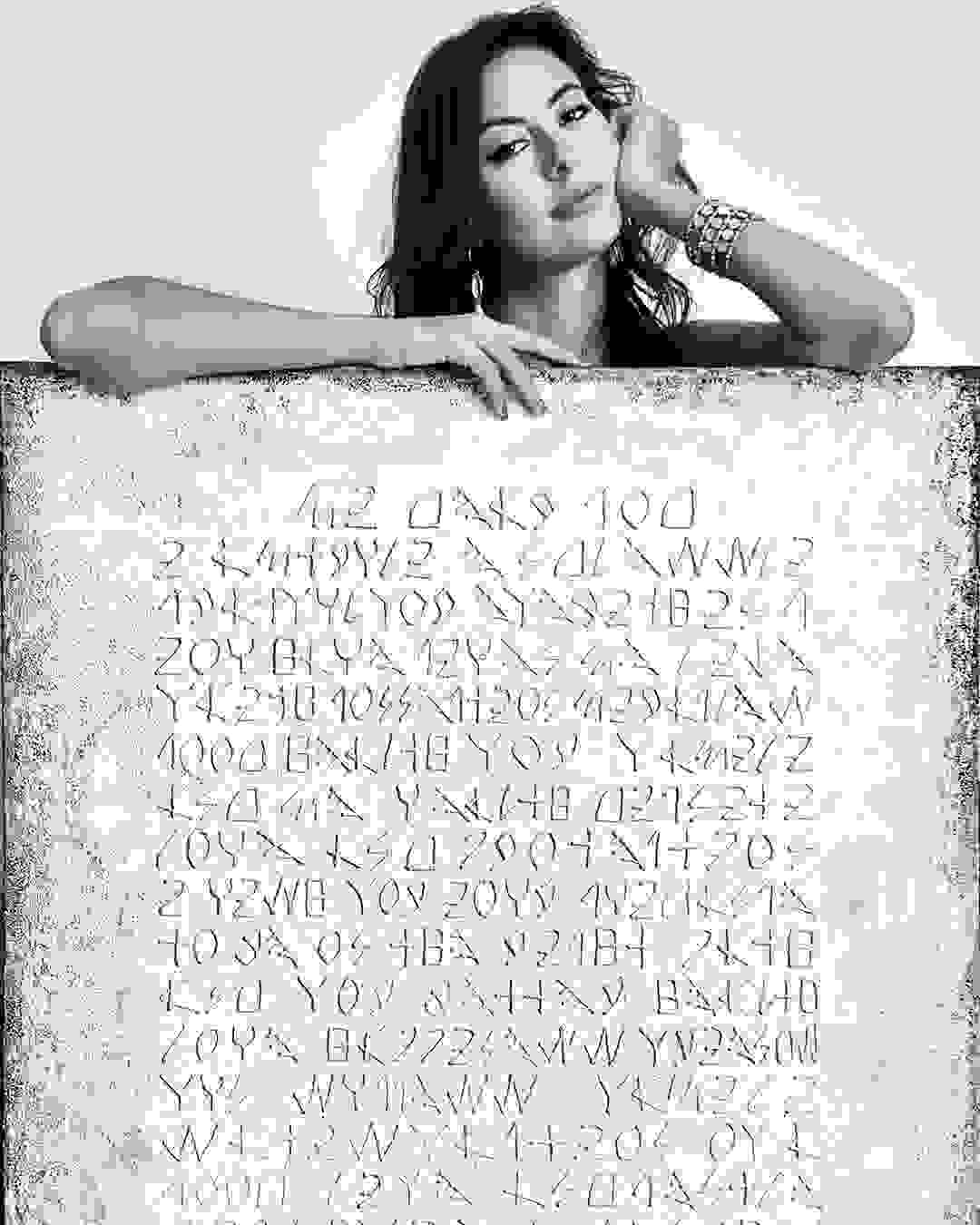 My secret Letter... In Phoenician... I am Phoenician

Is it a volcano? Fire works? A person lying down surrounded by his/her aura? Or maybe a couple holding a child, surrounded by angels and a big halo? What do you see?


In 2015, I painted an abstract hand generously offering gold dust and magic. It is God’s helping hand.


Three years later, I'd quit my job and ventured into creating a coffee startup. I invested all of my savings on creating recipes and starting the business, that I actually became broke, not even able to pay the rent of my atelier. Asking my family for money was not an option, as they were against me quitting my 9 to 5 job, which they were pressuring me to go back to.


Lost, out of solutions, all I was able to do was to pray. It was a holy month—June 2018, and precisely, The Destiny Night. One night per year, according to the moon and stars, it is said that a faithful’ person's prayers do come true. It is said to be a worth a thousand nights. I asked God to send me some money to survive without having to ask for anyone's help.


The next day, I was contacted by an amazing lady, whom I had never met, who lives in Europe, who'd seen my paintings on social media, and decided to buy this painting. She thought it was a volcano. I had no idea how much to price it. I never thought anyone would actually care to buy any of my work. I told her to pay whatever she thinks this artwork deserves. She offered a sum that was even more than I had wished for.
And that was God’s helping hand, at work through an angel I had never met. 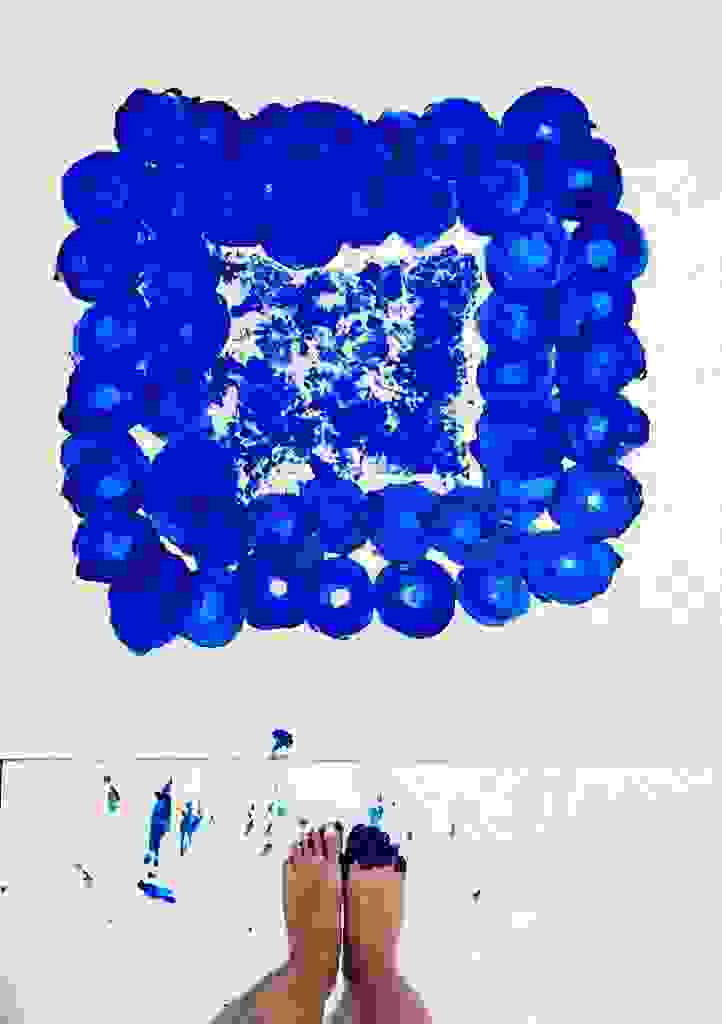 Painted with my feet, turning and swirling while I danced to a song that vocalized my favourite Poet, Rumi: Return to your soul.

During a pandemic, locked down with my own thoughts. I had to escape. Blending music & paint on a canvas. Painting with my whole body & all of my senses. 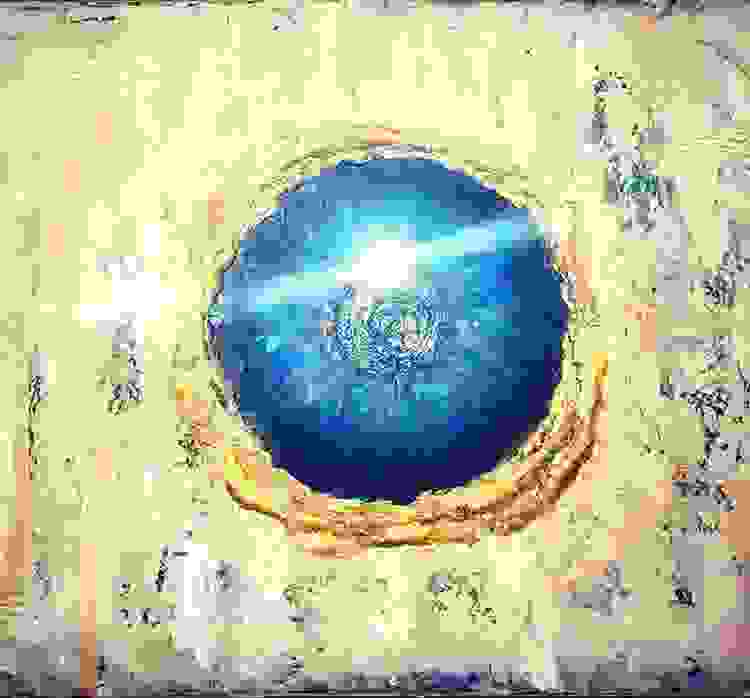 Mirror Of the Soul

A canvas placed above another, torn in the middle, revealing a universe with constellations and black holes underneath.

Or is it the pupil of an eye with with a tiny mirror reflecting the outside world? 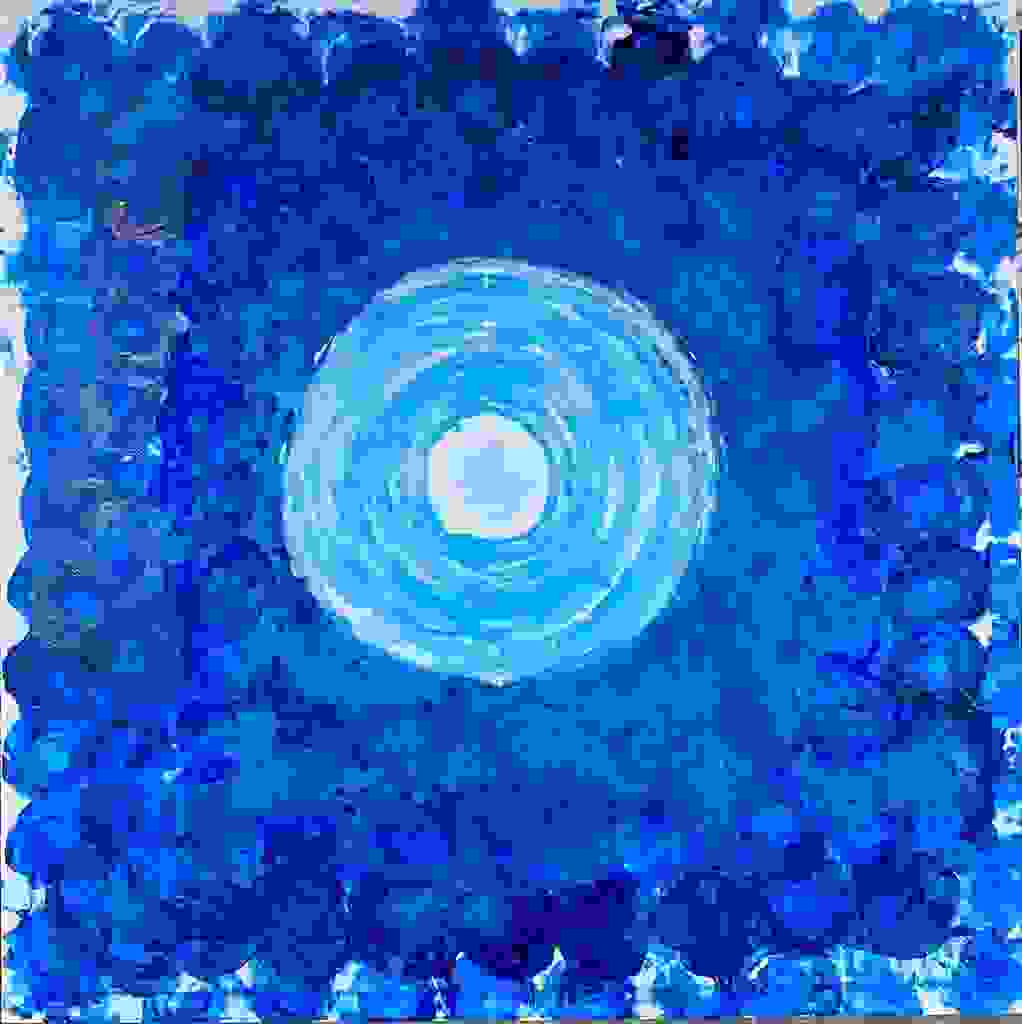 Painted with my feet. While dancing to the music of a song that vocalized Rumi's poem: Protect yourself from your own thoughts.

During a pandemic, locked down with my own thoughts. I had to escape. Blending music & paint on a canvas. Painting with my whole body & all of my senses. 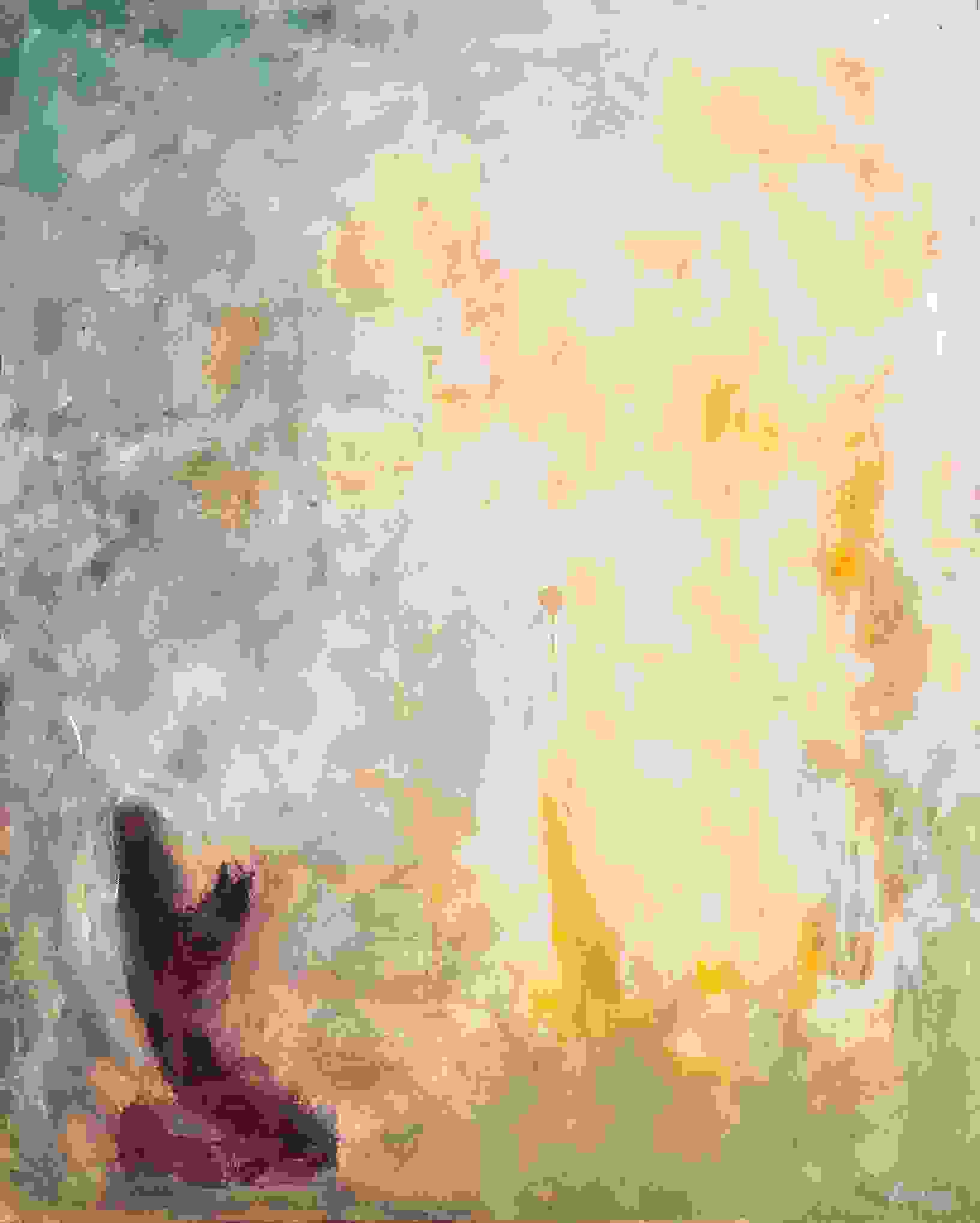 I wanted this painting to be the easiest. I was tired of thinking and planning and even of feeling. I closed my eyes, randomly chose the colors, poored them on a palette, and with my eyes closed, with no control over the outcome, I painted. When i opened my eyes, I saw an abstract mess. Then, I realised that the dark violet brush stroke at the corner, could seem like someone, on his/her knees, praying... I smiled :)

This painting is about a long-distance relationship that reaches out from Nigeria and its rivers, across to the UAE, its deserts and palm trees.

It's about a love between two people, that grew stronger with distance, forming a unified heartbeat, until one night they tied the knot, beneath the glow of a starry sky.

SOLD (to the lovers) 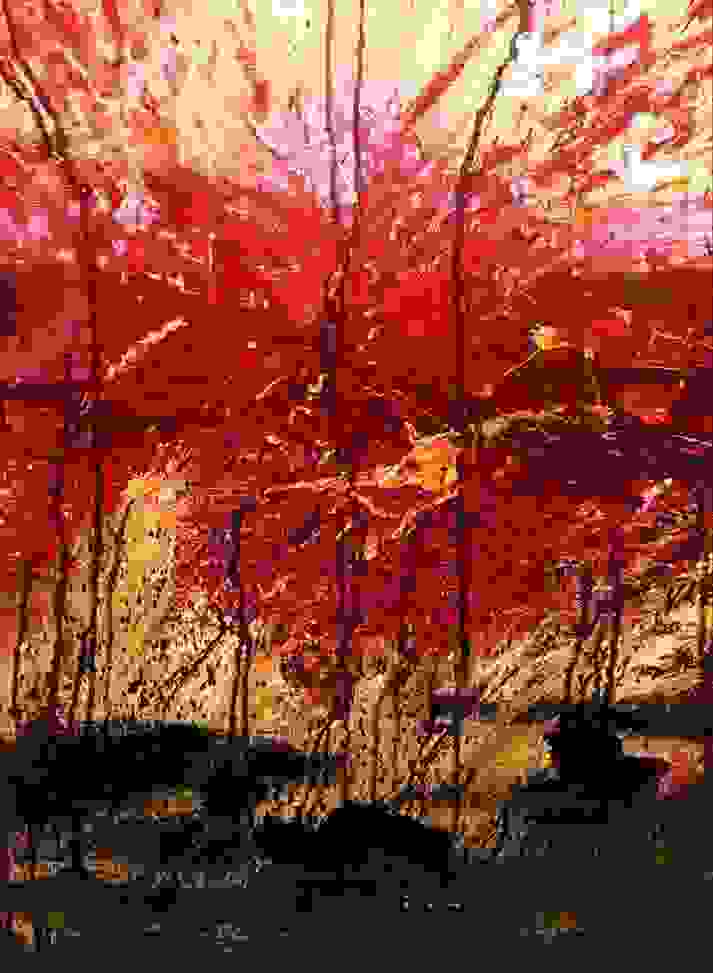 What do you see?
.
.
I see a perfect failure.
.
.
Goals are not always meant to be achieved, sometimes they are meant to get us started, and to discover what we are really meant to be…
.
.
Underneath this painting, lie 5 previous failed ones that I kept trying to fix until I gave up and started throwing everything in front of me at the canvas: paint leftovers from my palette, dirty black water that I used to clean my brushes with, amongst other things.

I hit it to take my revenge from it for wasting my time. It seriously pissed me off because I thought I had failed. I decided to throw it away. I left it on the balcony under the rain.
.
.
Then a guest came over and saw it. He was amazed by its beauty and urged me to keep it. He said: “It can speak. It moved a deep feeling inside of me—just like the sound of deep music.”
.
.
Ever since, I started loving this failure. It taught me so much about struggles, goals and destination, and the beauty that lies underneath each of them.